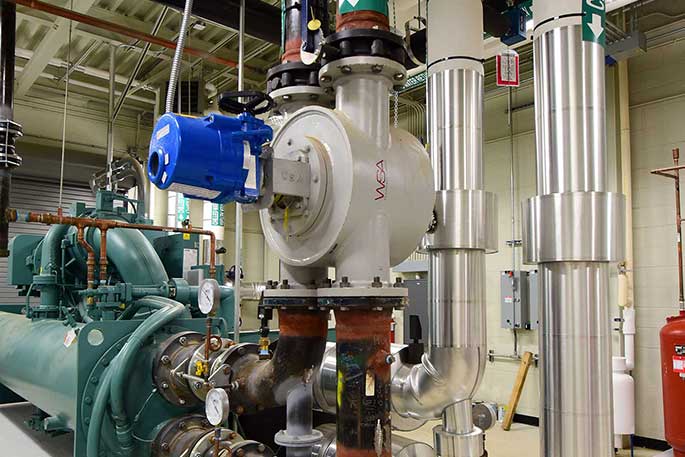 There is no escaping the fact that fouling is going to take place on the heat transfer surfaces of refrigeration machines. Scale, corrosion products, algae, silt, sludge, and petroleum products adhere to heat transfer surfaces, gradually building up and leading to a loss of gradual cooling capacity. Even refrigeration machines that harness sophisticated water treatment chemicals and control systems suffer the same fate.

The solution has traditionally been to provide more capacity than the system needs. But over time, the refrigeration machine has to work much harder to drive rejected heat into the cooling water. About once per year, the entire system has to be shut down to clean the tubes manually. A better approach can be online automatic brush-type tube cleaning, which continually removes fouling.

“Online tube cleaning systems can bring facilities 10% to 35% in energy savings,” said Gesser.  “Payback is often in less than a year.”

The Hapuna Beach Prince Hotel in Hawaii, for example, has been running such a system from WSA Engineered Systems of Milwaukee more than 20 years. When it opened in 1994, chillers were installed along with the WSA cleaning system. Gary Akima, lead maintenance supervisor at the Hapuna Beach Prince Hotel, said the chillers operated very well for two decades, as did the automatic tube cleaning systems. However, a chiller check valve sustained damage which led to ruptured tubes. Rather than an expensive repair, the hotel installed two new chillers by York.

“We inspected the tubes on the old chillers and found no fouling in evidence after twenty years,” said Akima. “That reinforced our decision to continue with online automatic tube cleaning.”

The primary York unit is 380 tons with a backup York unit of 400 tons. The hotel runs the primary unit most of the time, but switches to the backup unit for a few days of every month.

Akima said the system from WSA Engineered Systems consists of a set of two baskets and one brush for each condenser tube. There is a 10-in flow reversing diverter valve for each chiller. A basket is mounted at each end of the condenser tube to house the brush at the downstream end of the tube, and to permit full condenser tube flow without measurable pressure drop.

The brush is propelled through the tube by momentarily reversing the direction of condenser water flow. Flow reversal is accomplished by means of an automatic flow reversing valve incorporated in the condenser water piping system. The flow diverter valve is controlled by a timer which cycles the brushes every six to eight hours. That means each tube is brushed twice during each cycle. Brushes last about four years.

“We have about 460 brushes in each chiller and they run through about four cycles per day,” said Akima. “This is an essential aspect of maintenance as otherwise our hard water and high silicate content would begin to clog the pipes.”

He added that the Hapuna Beach Prince Hotel has a well-established water treating program. Parameters are set for conductivity, and chemicals are used to keep conductivity low. When it goes too high, the water is purged. Yet despite these safeguards, silicate still finds its way into the AC system.

Once a week, staff spends a couple of hours on routine maintenance. They check a panel to verify that 28 reversals took place (4 per day, seven days). In those rare instances when fewer reversals are shown, someone looks to see if a brush is jammed. In addition, staff keeps an eye on packing seals, and opens the heads to view the baskets to make sure they are clipped on properly. He reports no problems.

“A big benefit of the WSA Engineered Systems automatic tube cleaning system is that it greatly reduces the labor involved compared to having to manually clean the tubes,” said Akima. “But it also lowers your energy costs as you gain better heat transfer which reduces electrical consumption kw/ton.”

Twenty years ago, hotels, hospitals, and commercial buildings had large maintenance departments. Perhaps back then, manual punching of the tubes could be justified. But in an era when everyone is being forced to do a lot more with a lot less, automation is an essential part of staying on top of overall maintenance.

“With everyone downsizing, few organizations can spare the manpower to manually clean out tubes,” said Gesser. “They can’t afford the energy losses due to scale and fouling. An automatic tube cleaning system is the best way to take care of this situation.”

Estimate the cost of your project.

Get a Free Quote